Pydantic vs Protobuf vs Namedtuples vs Dataclasses

Before my introduction to FastAPI I was manually crafting classes to hold data. This was completely fine, but then pydantic changed the way I thought about this. Who wants to write a custom __init__ class for every data type, with type checking? However, over-time I’ve learnt some of it’s limitations and other libraries such as protobuf or namedtuple kept cropping up. My hunger to over-complicate everything finally made me try them all out and this post is the result of that inability to KISS1.

As I’m doing a lot of simulations in the near future, I decided to use two data types

These were then instantiated with the same random data using

Note the dtype=int. This was done to test if the class do any type conversion (spoiler: some do).

The variables in the following code examples have prefixes to show what library they are related to. NT is namedtuple, DC is dataclasses, PD is pydantic, and PB is protobuf. Easy.

After creating the data models, as seen in the appendix, the classes were intialized. The method for dataclasses, namedtuples and pydantic were identical.

Protobuf was much different though. As can be seen on line 3 below, the coord is added to the list of coords, and then filled with values. This results in quite a bit more boiler plate code but if one knows about it, it’s surprisingly readable.

All 4 data models were filled with int on purpose. dataclasses, pydantic, and protobuf have capabilities to define a data type for each field so those are the ones expected to convert the data if possible.

That’s weird… dataclasses don’t convert the field? Apparently this is expected behaviour and the suggested workaround is using a static type-checker like mypy, pydantic.validate_arguments, or in the dataclass.dataclasses.__post_init__ method.

pydantic and protobuf both convert the types which is nice. However, will this add much computational overhead?

One of the largest downsides of using a data class is the additional performance overhead. In my simulations, I run hundreds of thousands of trials with multiple thousand steps so any increase in computational time is noticed. 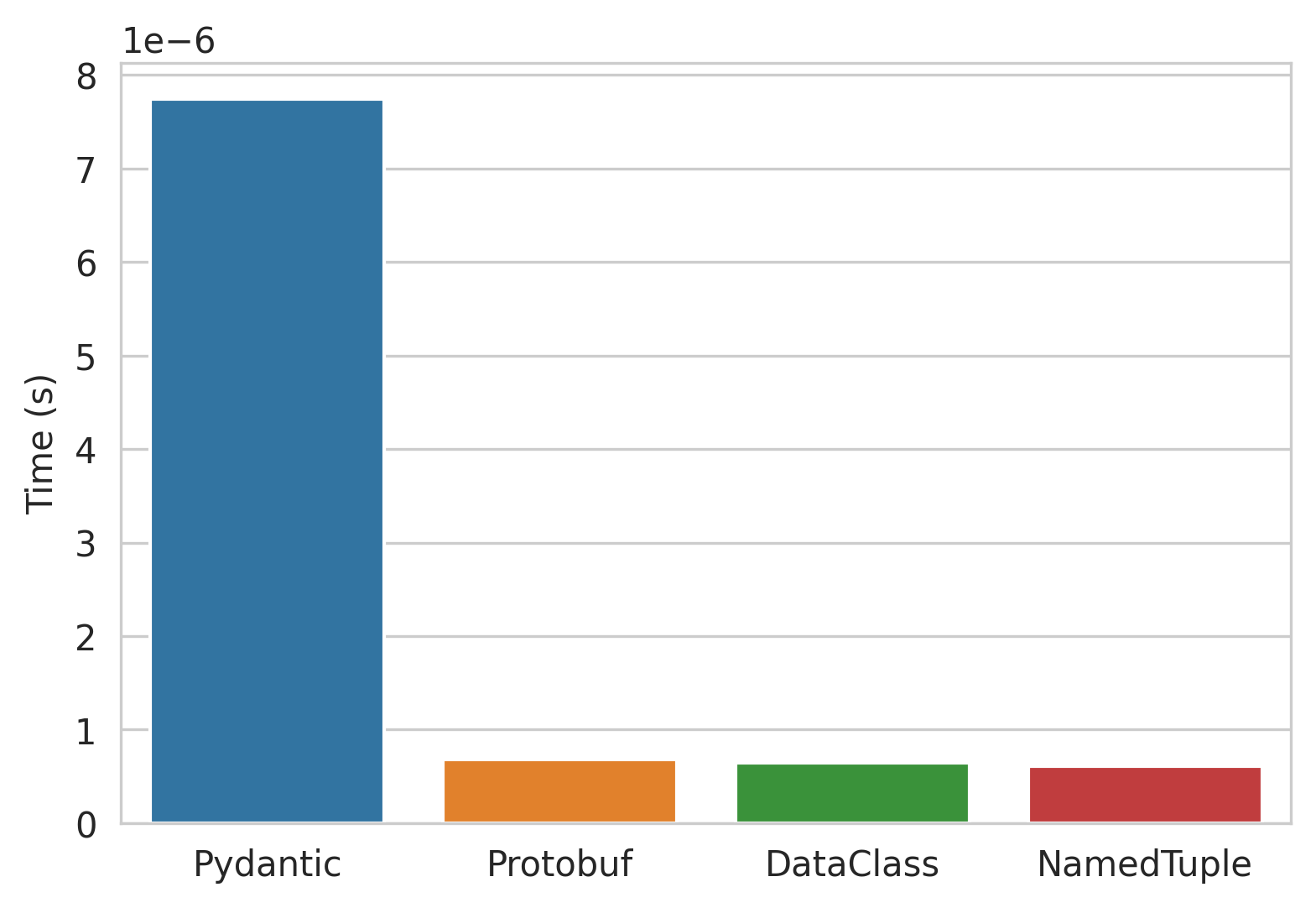 This is where we can really see the overhead of converting the types from int to float in pydantic. However, protobuf does not have nearly the same problems2.

I’m honestly quite shocked at how well protobuf did. It’s mean time was 685ns whilst namedtuple achieved 608ns and dataclasses did 643ns.

Another important aspect is storing my millions of data points. The “classic” method is via CSV or JSON. However, this struggles with multiple Coords so we’ll give JSON a shot. Yes it’s not meant for storing large series data but it’s easy and available and probably what most people will turn to. Pickleing is another option but this does not create human readable output, nor does it store very well3.

dataclasses were a weird one, because it required a custom JSON encoder. However, 5 lines of additional code isn’t too bad in my opinion.

namedtuple was actually quite easy, using the inbuilt _asdict() method resulted in

pydantic has a built in json() method so this was as easy as pdcoords_json = dcoords.json().

protobuf, being different as per, required the import of MessageToJson:

All serializations were more or less identical except for namedtuple. For whatever reason the list of NTCoords was serialized into a 2D array. Hopefully this won’t cause any issues with the de-serialization (foreshadowing much?)

Deserializing from the JSON string showed pretty much exactly what I expected.

namedtuple lost the data structure when it converted to JSON and dataclasses does not properly convert the types at instantiation. pydantic and protobuf both check what types every field was using and converts the data (correctly) back into that type.

Whilst JSON is great for human-readable, easy-to-transfer data, it is not compact. For the next comparison where possible, the smallest representation was used. Deserialization was not considered as right now we’re only concerned with storing large sets of data. Using it is someone else’s job (usually me, in a few weeks time).

protobuf is the only non-JSON encoding. The inbuilt SerializeToString is very powerful and one of the core features of the library. Since the data class is compiled with a tool, and not just into python, it gives developers a huge advantage by easily creating highly optimized cross-platform data. 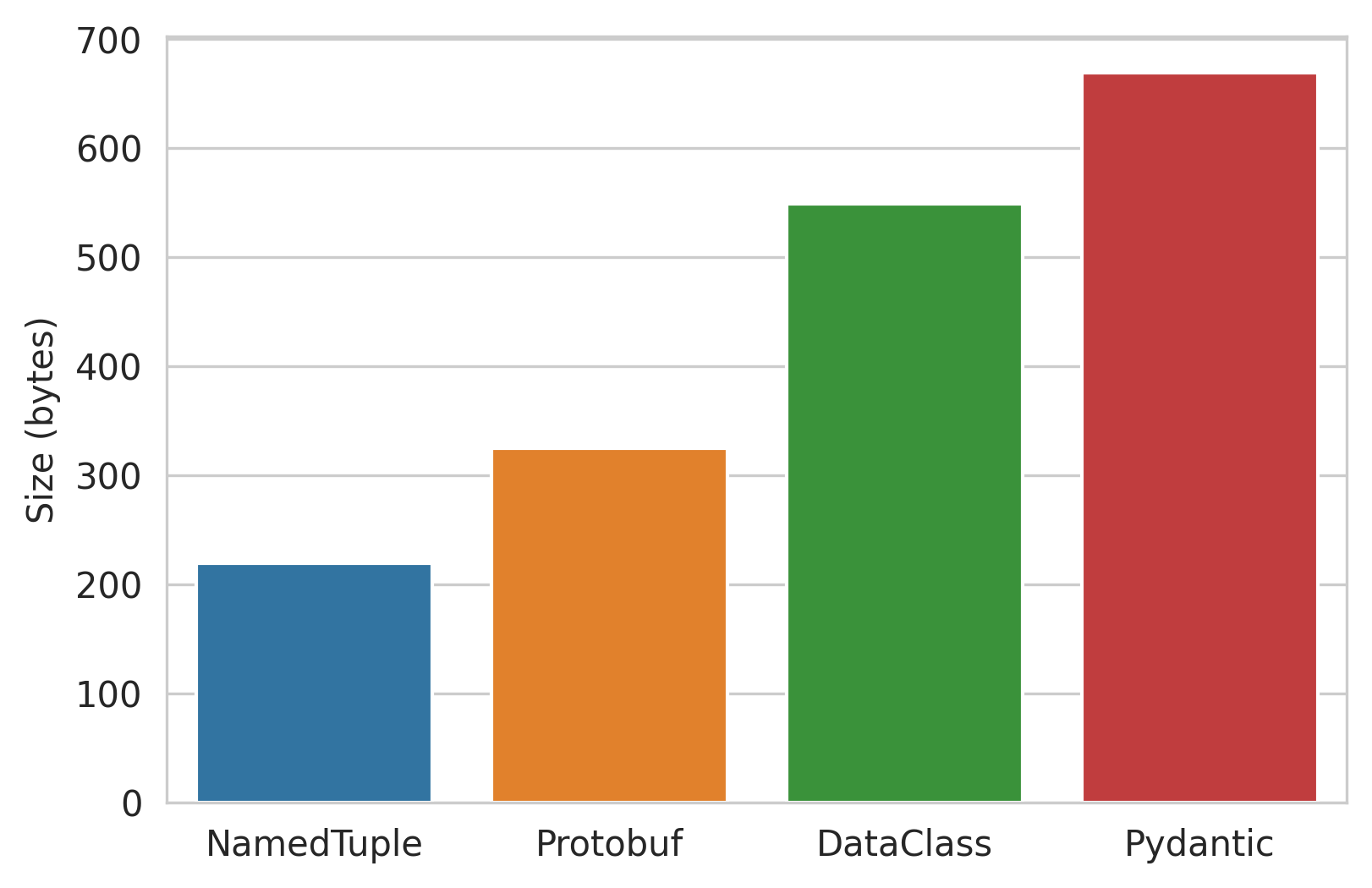 Next, why is namedtuple better than protobuf? Isn’t protobuf “oh so highly optimized”? Well yes, but if we recall from the JSON serialization results, namedtuple just bungs the data into a 2D array and cannot deserialize it properly. A 2D array will always be smaller than a data structure that tries to save as much data about the object as possible. The JSON output for dataclasses, pydantic, and protobuf were close to identical, so a 2x improvement is very impressive.

To your dismay, there is no easy conclusion. I have fallen in love with the idea of using protobufs, but the overhead of compilation and the weird method of creating the classes is quite off-putting. The speed and serialization benefits over the other 3 cannot be played down though.

pydantic performed shockingly bad, but the strict type checking and ease of use will have me coming for less performant instances.

The benefits of dataclasses and namedtuples are as they’ve always been: both are shipped with cpython and are sufficient. namedtuples can be created in one line and allow easy to read code, whilst dataclasses are more akin to pydantic but require more setup.

I hope this investigation into the 4 main data class libraries in Python have helped you. If you have any libraries you think I should have included, please let me know in the comments!

Paperless-ng On Raspberry Pi With Email And Samba