My pal showed me Wordle for the first time the other day and I instantly wanted to know what the objectively best starting guess was. Some may argue that that’s not in the spirit of the game and that it should be a daily challenge, but those people probably don’t spend 45 minutes on their first game (that’d be super awkward right…?).

Firstly we need to figure out some heuristic to measure the goodness of a word. The most intuitive would be to pick a word with the most frequently used letters within the set of 5 letter words. Thus, we can measure a words score using

which translates to the sum of the frequencies of each individual letter.

Enough maths. Let’s get into the code.

Next, let’s get a word list. I chose this one because it was the first one I found. Simple. We’ll read this into memory, but only the 5 letter words.

This results in 15918 possible words. My guess the Wordle backend uses a wordlist similar, if not exact, to this one.

We then need to count all the letters and divide by the total amount of letters to get each letter’s frequency.

This results in a nice graph with a surprising result. 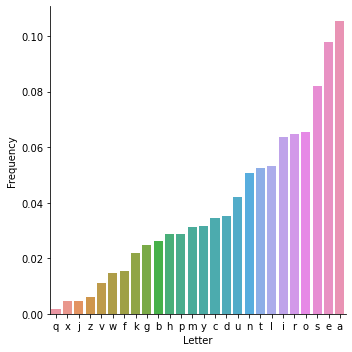 Most frequent letters in the set of all 5 letter words

a seems to be the most common letter even though it’s a commonly known fact that e is th most used letter in the english language! This is (probably) because we’re limited to the set of 5 letter words, and no all words.

Another optimisation on the quest for the best starting word, is optimising the word to exclude repeating letters. Having skiing, for example, would be a waste of a letter so let’s employ a nifty hack using set.

As you can see above, we can easily filter for words that have multiples if the set object containing that word has a length less than 5. 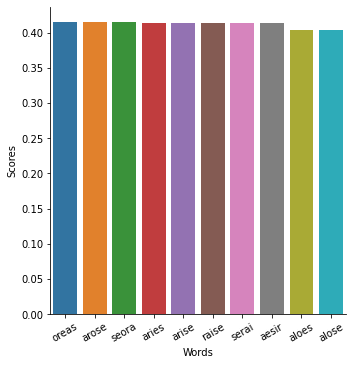 ❗ Disclaimer - I am terrible at this game, and these words might be terrible too for various reasons. Use at your own risk.

Pydantic vs Protobuf vs Namedtuples vs Dataclasses

Paperless-ng On Raspberry Pi With Email And Samba